The head of the Development Bank of Latin America resigned: he condemned the pressure of Argentina

Louis Carranza, executive chairman of the Latin American Development Bank (CAF), will step down in April, a year ahead of plans, the Caracas-based financial institution said in a statement on Tuesday.

“Louis Carranza will end his term next April. It’s almost a year ahead of schedule, but leaving a company is thanks to a structure that is similar to the reality of CAF’s size, goals and responsibilities. ”The writing says.

Corranza, for his part, promised it He resigned after the CAF board of directors failed to approve the appointment of Bernardo Requena, whom he trusted as vice president of national projects.

“This decision responds in part to my judgment For refusing to allow the interest of some countries to interfere politically in the powers of the Constitutional Agreement to appoint immediate collaborators of the Executive President. “The former CEO said in a letter.

“In particular, The directors for Argentina asked me to appoint someone as vice president, both verbally and through written messages in early 2020. Documents proving this complaint are in the custody of the General Secretariat and are in the possession of members of the Board of Directors if they deem convenient, ”he added.

The company considers this four-year administration to be “closing a cycle that reflects a turning point”, from the President to the present, with the aim of “safeguarding the institutional structure of the CAF, enhancing its effectiveness and responding to the challenges facing our nations”.

Among these achievements over the past four years, the CAF report highlights the unification of Mexico and Costa Rica as full members. Or 28% growth in integrated portfolio.

“We have chosen the company’s digital transformation and the most efficient operational management, setting strategic goals with scalable indicators.

Similarly, the report states that “they acted quickly and efficiently during the epidemics” with a record of more than $ 14,000 million in approvals, “primarily aimed at supporting countries in their efforts to deal with this difficult situation”. 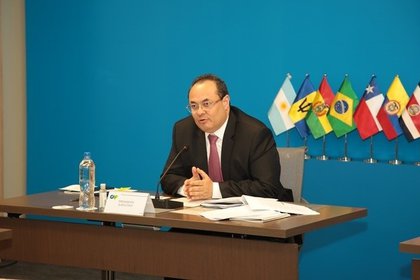 Louis Carranza Ugarde, a Peruvian, was elected by a majority of the executive chairman of the CAF on December 13, 2016 at an extraordinary meeting of the company’s board of directors.

Corranza was on two occasions the Minister of Economy and Finance of Peru, as well as a leading economist who worked for the International Monetary Fund (IMF), the head of the BPVA in Latin America and the emerging markets in Spain.

Prior to serving as President of the CAF, he served as Director of the Center for Competition for Development at the University of San Martின்n de Porres.

Venezuela Opposition thanks Dominican Republic for searching for regular immigrants

The country’s low risk opens up positions in Ecuador’s international markets; These are the benefits | Economy | News