Ohio has a rich history of athletics that goes back generations. Some of the most famous athletes in US history were born in Ohio like golfer Jack Nicklaus, baseball pitcher Cy Young, and legendary NFL coach Don Shula. Even today, this tradition of greatness carries on with a plethora of talented athletes you can follow. Here are some of the best Ohio athletes competing today.

Varner is one of the best golfers on the greens today. Born in Akron Ohio, he is a tremendous talent that plays to win every tournament. Despite being 31 years old, he competes with the best of the younger generation and currently has +175 odds to win his group at the Northern Trust. Varner’s best placing came in 2016 when he swept the Australian PGA Championship and took 1st place.

Roethlisberger is the latest in a long line of great Ohio quarterbacks and he has certainly had a phenomenal career. He is the quarterback of the Pittsburgh Steelers where he has played his entire career. Even at 39 years old, he continues to play at the highest level and made it to the postseason again in 2020 with a record of 12-4. To date, Roethlisberger has two Super Bowl championships and seven Pro Bowl nominations.

When you speak about the greats of the sport of basketball, names like Michael Jordan, Kobe Bryant and LeBron James come up. James is still a phenom on the court and one of the top players in the NBA in 2021. He was born and raised in Akron, Ohio and was selected by his hometown team, the Cleveland Cavaliers, in the 2003 NBA draft. 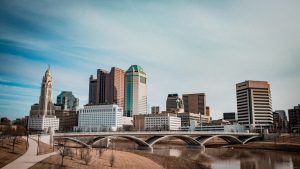 Following in LeBron’s footsteps is Stephen Curry, another standout NBA player from Akron, Ohio. In fact, Curry was born in the same hospital as James, just three years later. On that note, Curry was in fact born to be a basketball player. His father, “Dell” Curry was an NBA shooting guard for over 15 years and his brother, Seth Curry, also plays in the NBA currently. Stephen Curry is a joy to watch on the court as he effortlessly shoots 3-point shots and he is a 3-time NBA Champion.

Brent Suter is a MLB starting pitcher for the Milwaukee Brewers that is currently having a phenomenal season. His pitching record for 2021 is 12-5 with a 2.81 ERA, demonstrating that he is a very skilled and dependable player. This season, the Brewers have amassed a record of 73-47 and are well on their way to the postseason. Baseball analysts have been quick to give the credit to their excellent pitching roster including Suter.

Suter attended the Archbishop Moeller High School in Cincinnati, Ohio, in his youth and this is where he truly learned to excel. The baseball program here is recognized as one of the best in the country and has created some incredible players over the years. Legends like Ken Griffey Jr. and Barry Larkin are both from here, as well as many others. Suter primarily utilizes a 4-seam fastball, curveball, and changeup as his arsenal and is exciting to watch on the mound.

Biles is a gymnast that despite being just 24 years old has already made a massive mark on her chosen sport. She was born in Columbus, Ohio and would eventually begin her gymnast training in her youth. Biles has an enormous amount of medals and awards for someone her age, including 7 Olympic medals — 4 gold, 1 silver, and 2 bronze. She is known for her floor routines as well as her impressive vaulting skills. Altogether, she is often considered the most dominant American gymnast of all time.