No one ever retires as young as athletes and sports stars, unless it’s for unforeseen circumstances. The main reason for such short career-spans is due to the nature of what they put their bodies through, they can’t carry on forever pushing their bodies to the limit. If they did, they would just cave in and be suffering from issues such as cardiac arrest. The only chance for them to carry on a career in the sport they love would normally be to move into coaching or punditry.

Rashad “Suga” Evans is one such retired star who was an incredibly decorated mixed martial artist, with a glittering professional career that began in 2003. Born in Niagara Falls, New York, Evans was always into his combat sports, having wrestled competitively ever since high school. He would eventually then make the jump to NCAA Division I wrestling, competing for Michigan State in the Big Ten with a record of 48 wins and 34 losses.

Adamant not to give up the sport he loved, Evans was taken under the care of UFC Hall of Famer Dan Severn, who taught him about the world of Mixed Martial Arts (MMA). His first real sign of how good he was came when he was declared the heavyweight winner of The Ultimate Fighter 2, before going on to also become a UFC light heavyweight champion. During his time there, he had 28 fights in total, winning 19 (seven by knockout, 2 by submission) and lost just eight (three by knockout).

But in 2018 Evans declared he was retiring from MMA, and made it into the UFC Hall of Fame a year later. But, that retirement didn’t last long, as he announced he was coming out of retirement in order to enter the ring once more. However, it wouldn’t be a return to the UFC for Evans, instead, he would be appearing at Khabib Nurmagomedov’s promotion, Eagle Fighting Championship.

Whilst he makes a return though, and a date has been set, his opponent is not yet been revealed. But you can stay updated with the latest predictions about MMA on sites like wynnbet NY sportsbook. And once an opponent is picked, we’ll know more about the fight like the odds of Evans winning on his return from retirement.

When asked about if his return from retirement was a permanent decision, Evans stated in an interview with SiriusXM:

“It’s a one-fight at a time thing, you know? I’m not crazy, I know what this is and I know what this is about. It doesn’t take away the significance of it. Sometimes we get to the mindset where we’re like ‘if I’m not chasing a belt, then I’m not chasing anything’. For me, to compete is my reward. And to be able to do it in a way and a shape that I want to, that to me is all I really needed, to be honest. I just see life differently. I’ve challenged myself in my life and I know what I’m capable of when I’m at my best and I just want to feel that feeling again.”

So it’s clear Evans doesn’t quite know what the future holds, whether he’ll fight again after this bout at EFC44. But what we do know is since his retirement, he’s been missing that feeling you get stepping in the octagon. He misses the hype around the fights, the way his adrenaline pumps around his body, and the thrill of proving yourself against the best and testing your limits.

But he also doesn’t shy away from the fact that he knows he isn’t what he once was. That there are limits he can’t push his body to any more, and it’s about finding those limits. About finding where he can compete and that appears, at this moment in time, to be EFC44. And since a bunch of other former fighters are also on the card, with former UFC bantamweight champion Renan Barao taking on his former UFC colleague, Horacio Gutierrez, it seems he may be able to get a few fights against some other aging fighters. 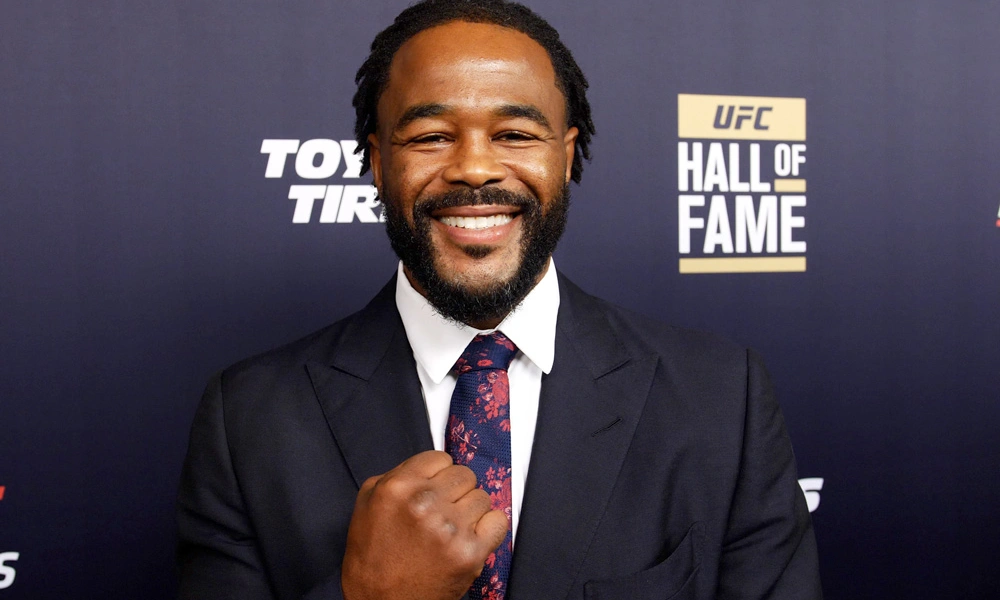 However, it doesn’t appear to be fighters his age he is after. Instead, in an interview with MMA Fighting on SBN, he spoke of potentially fighting YouTuber brothers Jake and Logan Paul. Stating he’s not coming back for the wrong reasons, for a big paycheck, he’s coming back because he feels it’s time.

And whilst saying you want to fight the YouTubers does sound like a money move, he has numerous other outlets he can earn money from, as he’s coaching amongst other things right now, so doesn’t NEED the payday. But, who would say no to some easy money like that? Because both brothers have big followings, and that can generate interest and money, and at the end of the day, there is no joy in beating an amateur up. So the money has to play a part in his mind somewhere.

But he also mentioned in that interview as well, another fighter he’d like to face: “Yeah, I did mention Roy Jones. You know, I’ve been a big Roy Jones fan for a long time, and Roy came up to my camp when I fought Jon Jones, and gave me some pointers, and I’ve known Roy for a few years, I know his manager really well. So it’s one of those fights that made sense”.

At the moment though, no fighter has been picked against him. And with just over a month to go until the fight at EFC44, there isn’t much time to get someone in for January 28th, 2022. That could mean, it will be a last minute fighter that steps in, which is unfair to both fighters because neither is able to fully prepare. Or, it could mean, they have someone planned, and it’s being kept under wraps for some big reveal to give the event a boost in publicity closer to the time it takes place.

All we know is it will be great to see him back, doing what he does best. We just hope his age doesn’t hold him back too much, and we see a good competitive fight.

Prev post Ecuador's Byron Castillo arrives in Lyon, they report in his country
Next post They launched the James Webb, the largest telescope ever sent into space

Modacua and Vida were goalless on Marcelo Dinoco de Donley on the second day of the Clausura!