The Eastern Conference-leading Boston Celtics are well on to their ninth consecutive playoff appearance and 15th appearance in their last 16 years. The Celtics this year under head coach Joe Mazzula have one of the league’s best offenses, averaging 118.6 points per game while also boasting a quality defense, allowing just 112.6 points a game, best for 13th in the league. After being +500 favorites to win the NBA Title in the preseason, the Celtics now own odds as low as +320, the best across the league. Massachusetts residents can prepare for legal online sports betting in the state by checking out BetMGM’s bonus codes.

Jayson Tatum is among the league’s top MVP candidates…

Star power forward Jayson Tatum is among the league’s MVP favorites at around +400 thanks to averaging 30.8 points and 8.2 rebounds a game this season. His start to the season has also been good enough to push him all the way up to third in NBA All-Star voting for the Eastern Conference’s front court. He sits only behind Kevin Durant, and Giannis Antetokoumpo.

Small forward Jaylen Brown isn’t too far behind Tatum’s performance this season, averaging 27.2 points and 7.1 rebounds per game himself. Outside of Tatum and Brown, it’s been a complete team effort for the Celtics.

Only two other players are averaging double-digits on a nightly basis in guards Malcolm Brogdon and Marcus Smart. That being said, five other Celtics are averaging over five points a night as well.

That being said, while it’s been a strong season thus far for the Celtics it hasn’t all been good news. 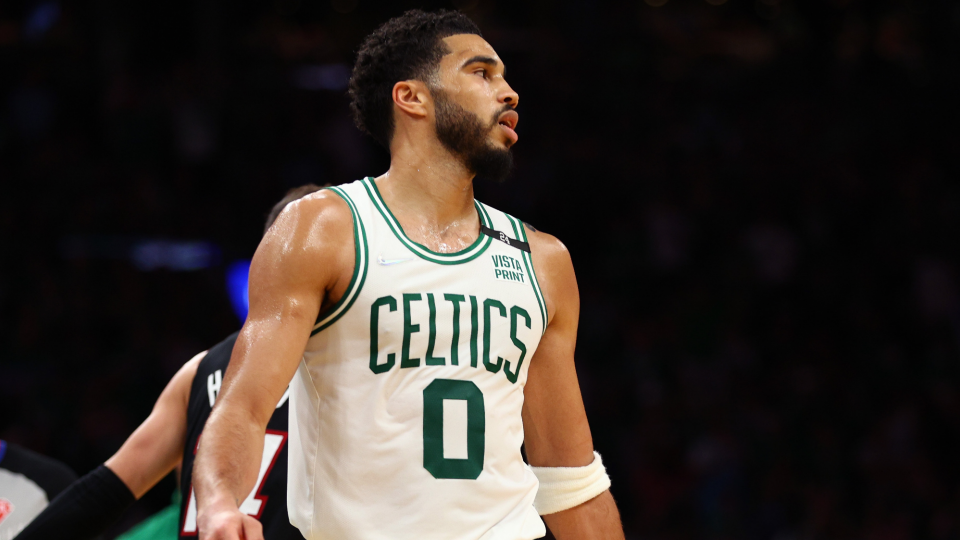 Jaylen Brown is set to miss some time with abductor strain…

It recently came out that the aforementioned Jaylen Brown will be out for a short period of time, up to two weeks due to a right abductor strain. The Celtics ruled the six-year veteran out on Thursday shortly prior to their big win over the Brooklyn Nets.

As mentioned above, Brown has been pivotal to the Celtics success this season, averaging 27.2 points per game. He’s been a fantast shooter, shooting 49.8% from the field overall including an effective field goal percentage of 55.8%. He’s just not impacting the game offensively as his 7.1 rebounds a game ranks third on the team while his defensive rating of 117 is among the lowest of Boston starters. He’s simply been dynamite for the Celtics this season, recording eight double-doubles including a 25-point, 15-rebound performance on December 13 in a 122-118 win over the Los Angeles Lakers.

With Brown out of the lineup for the Celtics for the next week or two, the Celtics are likely to start the five of PG Derrick White, PG/SG Marcus Smart, SF Jayson Tagum, PF Grant Williams, and C Robert Williams III. In their first game without Brown, the Celtics knocked off the No.2 seed currently in the Eastern Conference, the Brooklyn Nets 109-98 behind 20 points from Jayson Tatum and 16 points from Marcus Smart in his first game since returning from injury.

Celtics schedule sets up for success…

The good news for the Celtics is that their schedule for the rest of the season is among the easiest in the NBA, in fact, it’s the fourth easiest with their opponents remaining winning percentage at 48.4%. While they do have nine games left against the Nets, Milwaukee Bucks, Cleveland Cavaliers, and Philadelphia 76ers, they also have plenty of matchups against the Houston Rockets, Charlotte Hornets, Detroit Pistons, and others remain.

With that, even if the Celtics do have to deal with the occasional injury in the second half of their season, their schedule should allow them to remain comfortably at worst in the top three of the Eastern Conference but the ability to stay as the conference’s top seed is certainly there thanks to their remaining schedule.

Their schedule over the next two weeks is also quite manageable with two games against Charlotte, a home showdown against Golden State as well as three straight road games against Toronto, Orlando, and Miami.

What moves will the Celtics make at the trade deadline?

The NBA Trade deadline isn’t too far away, looming on the horizon on February 9. While the Celtics feature one of the best backcourts in the NBA, they’ll likely need to upgrade on the frontcourt end of things. Center Robert Williams III has been good this year but should probably look to upgrade their depth at the position with Mfondu Kabengele, Al Horford, and Luke Kornet serving as their backup centers. They could choose to add to the power forward position as well with Blake Griffin being their backup to Grant Williams. Danilo Gallinari is technically on the roster as well but is still working his way back from tearing his ACL in August.