I was afraid to wear a tattoo visible. He chose to have his first personal engraving rest on the leg, in an area where it remains hidden. And it’s still there, it’s a skull with spikes that was tattooed at the age of 17. To his parents, a doctor and a housewife, he did tell them because they thought he would only do one.

He painted macaws and reached third place in the national painting competition. He was in the third year of high school, the National School of Fine Arts awarded him a scholarship as a free student. He finished school, entered the Pre Center and managed to enter Fine Arts in first place, which, he says, is something that rarely counts. “But yeah, it’s an achievement,” he accepts quietly. He was already tattooing and learning on his own. He did not finish his painting career, but he started on the path of tattooing. It’s been 20 years since then and three years ago he moved to New York, epicenter of art in the world, and where seven months ago he opened the doors of his own studio, Inknation.

The first thing he tattooed was a tribal dragon, but it was erased, he says it came out “super ugly”, and he laughs about that episode in January 2002, in a room of his house, where he tattooed his friends from the Magdalena neighborhood. The second tattoo was also erased. “I did not charge, I should have paid,” recalls the artist who today draws faces that surpass photographs, turtles that seem to swim in the depths of the sea, science fiction characters that come to life in the arms of their clients, skulls, dragons , tigers and neon lights. Magical realism.

We are in one of the environments of Tattoos For Daughters, his studio in Lima, with black walls and a glass wall that overlooks the eighth block of Larco avenue in Miraflores. Daniel ‘Zhimpa’ Moreno approaches the recorder, almost in profile. On the left side of his head, he wears a tattoo that says balance upside down.

LOOK: Vania Masías: “I am a good warrior and stubborn; and looking forward to what is to come “

-In Lima you were doing well, why did you leave?

There are always limits, edges that one touches.

-Have you reached the ceiling here?

I had done a lot here, I had become known, I had a clientele, I was very comfortable. But there is a world top and the only way to reach it was to start traveling, I started doing it seven years ago; I came to Europe, the United States, China. And I got the opportunity to move to New York, where little by little I began to have more clients. I am in a process of growth. It’s as if they were all in New York. With Inknation we are taking a big step.

-20 years ago, when you started, what was the tattoo in Lima?

I remember a lot the first cell phone I had, a Nokia (laughs). There was very little Internet, there were hardly any magazines, there was no where to get a good tattoo machine or good inks. Everything was very limited. Good tattooists were few. But my added value was that I drew. 90% of tattooists of that time only copied or made tribal.

-And how is today?

Today the tattoo is an art. It is seen as a professional way to create. Today most tattooists are artists and the public knows more, even grandparents understand what a tattoo is.

LOOK: Karen Yaipén: “The Yaipén are pioneers in northern music”

-If you were already doing painting in your adolescence, what caught your attention about the tattoo?

It was super casual. I was curious because it was a different medium. I entered the school of Fine Arts, but at that time I was on strike. I had a cousin who worked in a Galerías Brasil store. I visited him and his tattoo artist did not draw anything, and I told him: I teach you to draw and you teach me to tattoo.

-At this time of year many young people enter into the dilemma of what to study after school. Why being a tattoo artist can be an alternative?

The lifestyle of the tattoo artist has changed a lot. Today there are very artistic tattoos that cost a lot. I got my leg tattooed and paid $ 5,000. It is the value of art, of a tattoo that you will carry all your life. The tattoo has been specialized and it is super well paid if you do it professionally. But it is a long way.

-What prejudices still exist against tattoos?

-But I feel that the prejudice still persists that if you get a tattoo, you may be discriminated against in the workplace or have problems in the health system.

Regarding health, any chemical or substance evaporates through respiration and circulation. Regarding labor, the laws prohibit discrimination; In the United States, if you are discriminated against for wearing a tattoo, you can go to court. What’s more, there are entities that hire tattooed people to cover inclusion fees.

-Is being a painter still on your horizon?

I really want to do great things with paint. In these years I made several paintings.

-Will you grow old being a painter?

I can’t imagine stopping tattooing. I imagine taking the painting back to the level of the tattoo.

-Many must have the conception that being a painter is a higher level than being a tattoo artist.

LOOK: Alejandro Ponce, economist: “To be a businessman you have to be optimistic and a dreamer”

-Why did you get the word ‘balance’ tattooed?

Because it is the end to balance all the factors of your life, both work and family, of life.

-Is your balance in New York?

The end is within you, no matter where you are, no matter how you are. I am where I am not because I have looked for it. I never wanted to be an entrepreneur, to have stores. The end was art, it had to happen. You have to focus on the artistic.

– “I am Daniel Arturo Moreno Elías, but they call me ‘Zhimpa’. As a teenager they called me ‘Chimpandolfo’, because I was half a caveman (laughs), because of the character of Chespirito. They started calling me ‘Chimpamigo’, ‘Chimpatattoo’, ‘Chimpa’, and I only changed ‘c’ to ‘z’ ”.

– “I’m 37 years old. I was born in Lima. I finished school, I entered Fine Arts, but I stayed in the fourth year, for personal reasons and because I got jobs as a tattoo artist. One day I was in the workshop painting, I grabbed my backpack, I left and I never went back to school ”.

– “My father is a doctor, specialist in asthma and allergies, and my mother was dedicated to the house. I don’t know another artist like me in my family. In 2022 I will be focused on creation, on the artistic. I have already learned to do realism in color and now it’s time to evolve. I’m learning a lot in New York ”. 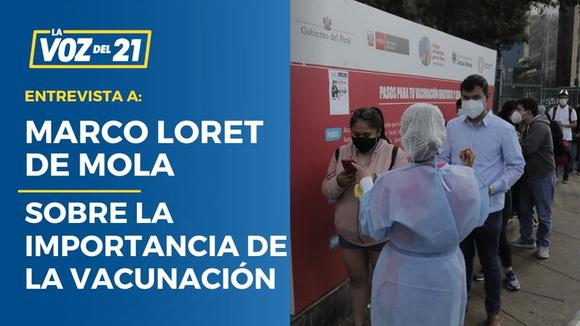 We spoke with Marco Loret de Mola, academic director of MatLab about the importance of vaccination against COVID-19 with the number of infections.


IT MAY INTEREST YOU

Prev post Summary of the Atletico San Luis vs Pacquiao (0-2) match. Goals
Next post Maria Sacon shows off her best body with a bikini on Instagram, which does not hide those closest to her.

Science.-The WMO places 2021 as one of the 7 warmest years on record – Publimetro México

Martha Cecilia Bustamante, the Colombian exalted by the French Academy of Sciences