On Wednesday (June 23), China’s president called the Tianhe space station module to express his support for the Shenzhou 12 astronauts and their historic journey. President Xi Jinping called from the Beijing Aerospace Control Center to congratulate the three astronauts on a mission he called a “milestone” for China’s space ambitions, which are led by the China National Space Administration. Shenzhou 12 is the first crewed mission to Tianhe, China’s proposed space station’s 22.5-ton core module, which was launched into low Earth orbit on April 28. On June 17, 6.5 hours after launch, Nie Haisheng, Liu Boming, and Tang Hongbo landed in Tianhe. “You are the first astronauts to be stationed in Tianhe’s core module, and you will conduct three-month space missions.” 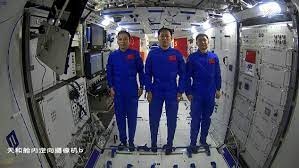 During the Earth-space video chat, Xi added, “Every Chinese person cares about your life and work in space all of the time.” When Xi inquired about their labour, health, and housing conditions, commander Nie aisheng responded that everything was going according to plan. Nie, who is on his third voyage to space, commended the working and living conditions on board Tianhe, saying : “We Chinese astronauts now have a long-term in-orbit home in space,” said one of them. The crew will execute two extravehicular activities, or spacewalks, as well as a number of technological tests, including the use of a giant mechanical arm designed to assist with space station construction, according to Liu. Tang remarked that he had adapted to the weightless atmosphere during his first space flight.

He was also able to make video calls to his relatives. China’s space station, according to Xi, who is also the General Secretary of the Communist Party of China and the Commander-in-Chief of the People’s Liberation Army, “will make pioneering contributions to the peaceful use of outer space by humankind.” Shenzhou 12 will be China’s longest crewed space mission to date, and it will be the first of its kind since Shenzhou 11 in 2016. In the event of an emergency, Shenzhou 13 is being prepared for a quick launch to Tianhe. In 2022, the three-module Chinese space station is expected to be finished. The call, while brief, indicates the depth of governmental support for China’s space endeavours, as well as high levels of national pride in the country’s space achievements. Xi has previously made similar calls to space.

See also  Iohannis knows when we will get rid of the pandemic! The news of the moment for all Romanians. Is mandatory 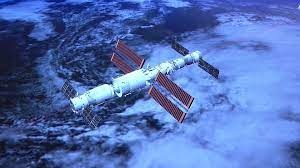 “The space dream is part of the dream to make China stronger,” he told the crew of Shenzhou 10 aboard the Tiangong 1 space lab in June 2013. The Chinese people will make greater strides to travel further into space as space programmes grow.” Xi also met with representatives from the Chang’e 5 lunar sample return mission earlier this year. China’s network of Tianlian relay satellites in geostationary orbit, 22,236 miles (35,786 kilometres) above the Earth’s equator, enabled the conversation. These communications satellites are essential for keeping in touch with the Earth. The Tianlian system will allow group discussions between astronauts outside in space, within the station, and teams back on Earth as extravehicular operations, or spacewalks, are scheduled. NASA’s Tracking and Data Relay Satellites (TDRS) network serves a similar purpose, facilitating communications with the International Space Station, among other things.

Prev post What really is the price of just a Bitdefender Premium VPN subscribing?
Next post Jamie is Spotted Star’s Conversation Hearing and the Singer apologizes to fans for presenting Fairy Tale