A leaked Magic: The Gathering card hints at a new mechanic inspired by Dungeons & Dragons.

Again, with each new Magic: The Gathering card set, “Experiences in the Forgotten Realms” will incorporate some new game mechanics. One of these new mechanics is by all accounts identified with prison diving, one of the essential sorts of experiences that Dungeons and Dragons are based upon. 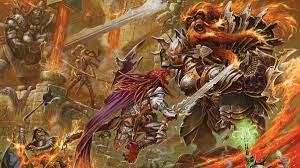 Recently, the Rulebook variation of a “Shelter Gargoyle” card was presented on the “magicTCG” gathering of Reddit. The card came from a craftsman’s private online media account, which was then submitted on a bigger Facebook bunch. The card text for “Order Gargoyle” advises players to “adventure into the prison” when it enters the combat zone.

While we don’t have the foggiest idea what a “prison” is with regards to Magic: The Gathering, pre-discharge packs for the “Experiences in the Forgotten Realms” set notices some twofold-sided foil “Prison” cards that will be remembered for each pack. Furthermore, Magic: The Gathering has additionally referenced that it would flaunt some prison-related cards nearer to the delivery.

Through expansion sets, new cards are published regularly. A well-organized international tournament organization (the DCI) has emerged, as has a worldwide community of professional Magic players and a sizable resale market for Magic cards. Due to their scarcity in manufacture and gaming use, many cards may be expensive, with values ranging from a few cents to tens of dollars.

Different cards saw in the set incorporates the underhanded mythical beast goddess Tiamat, the shrewd creepy-crawly goddess Lolth, and the notable drow officer Drizzt Do’Urden. She could likewise be the star of a forthcoming Dungeons and Dragons network show.

“Undertakings in the Forgotten Realms” will be delivered on July 23rd. We’ll have more inclusion of the set as reviews are provided later this mid-year.